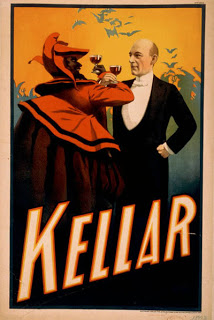 June saw the first of the monthly short fiction contests hosted on this blog. The challenge was to write a story of no more than 500 words inspired by the image above. The response was simply fantastic. I received over 60 entries, all of them interesting and fun reads.

Selecting the winners was difficult, made so by the quality of the stories everyone had written. It wasn't easy, but here are the winners:

Once again thank you everyone for entering and helping to spread the word about this contest. If you want to take part in the latest short fiction contest then check the links at the top of the page.

THE YOUNG KELLAR by John Mulligan

‘Yes, Mister Murphy, sir’.  I would try not to annoy him, so as to avoid the stinging smack of his big hand on the side of my head. He always hit from behind, when you least expected it.

Old Squarehead hasn’t much to say now, has he? Not a lot; no, sir!

PICK A CUP by David Haynes

“Take a glass, monsieur Kellar and drink with me. One is laced with poison and one with my blood. One will bring you straight to me and the other will bring you riches and fame beyond your wildest dreams.”

Kellar looked down at the goblets. Each one was filled to the rim with deep scarlet liquid and each one the same as the other.

The demon placed a crooked black nail upon the rim of each glass, “Choose carefully monsieur for your odds are no better than even.”

“You may choose my fate, sir,” Kellar placed his hands upon the glasses, “but you too must choose carefully,” with the dextrous touch of a master he switched the goblets, first one way, them the other, and back again. Two cups became four with the speed of his hand and they danced a dismal quadrille. When all was still, not a drop had been spilled.

“Ha! My eyes are faster than yours, monsieur," the demon cried. "I know which glass to select for I placed them here myself. Your head will look good on my pyre!”

“Then my fate is with you,” Kellar stepped back and bowed. “I shall drink long of my wine and wait for darkness to fall forever upon my miserable life.”

They linked arms as lovers about to be wed and tipped back the poisonous draft.

“It is a good vintage, is it not, monsieur?” his forked tongue flicked greedily at the side of his glass.

Kellar raised his hands to his throat and gasped for breath, “You have bested me, sir!”

“I always get my man!” the demon threw his head back and laughed.

A moment passed in silence as they waited for Kellar’s demise.

Then Kellar, from the depths of despair, rose from his knees and roared in glorious laughter, “There must be a mistake for I feel quite well!”

“Impossible!” the demon rubbed his blood red eyes. “There must be something wrong with my eyes.”

“Your eyes are fast, but not as swift as my blade,” Kellar turned over his arm, revealing a bloody wound on his wrist. He flicked a finger and a stiletto slid from beneath his starched white cuff. “Misdirection, sir, is my game,” he walked towards the demon and laid his hand upon the hot flesh of his cheek, “you now belong to me, for my blood is within you demon. It binds you to my will and counteracts your vile poison!”

“No! It cannot be. I never lose! I will not be bested by a mortal man!”

“It is not so bad. There is still fun to be had but we may have to come up with a name. Come we have a glorious show to prepare and all the ladies adore a magician,” he winked at his new assistant who licked his demon lips with a flick of his blackened tongue.