I'll confess that I approached this final book in the Void trilogy with a little trepidation. The cause was my previous experience with the Night's Dawn trilogy - which was a fantastic read, but the ending fell a little flat for me. There was no need, this was a fantastic conclusion to the story. For me this has everything I look for in great sci-fi. There's some fascinating concepts here, mixed with good plot and characters. And for those who enjoy exotic weaponry, some well drawn fights.

The weakness of the story remains Edeard, and the dream within the void. Although these now fit into the wider plot more smoothly than for the previous books. It was also interesting to see how much of the conclusion was telegraphed from Inigo's dreams. It was also from these I caught a glimpse of where the story was heading.

Other aspects came as a surprise, and ratcheted up the tension of unfolding events. The pace of which far exceeded the previous books and really got things moving. In the previous books the number of different threads for the characters seemed excessive, but everything came together, without tripping over each other.

Carrying it all is the authors quality of writing. It's an accessible style which works when describing complex ideas, or mundane interactions between characters, and even arcane ship combat. He also creates a vivid world, with a complex set of ideas. I love a good story with aspects that are worth thinking about separately from the story, and in this, the book more than delivers. 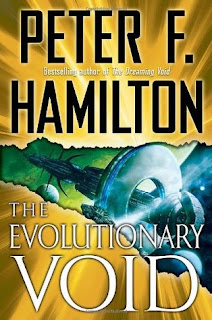 Exposed as the Second Dreamer, Araminta has become the target of a galaxywide search by government agent Paula Myo and the psychopath known as the Cat, along with others equally determined to prevent-- or facilitate --the pilgrimage of the Living Dream cult into the heart of the Void. An indestructible microuniverse, the Void may contain paradise, as the cultists believe, but it is also a deadly threat. For the miraculous reality that exists inside its boundaries demands energy--energy drawn from everything outside those boundaries: from planets, stars, galaxies... from everything that lives.

Meanwhile, the parallel story of Edeard, the Waterwalker -- as told through a series of addictive dreams communicated to the gaiasphere via Inigo, the First Dreamer -- continues to unfold. But now the inspirational tale of this idealistic young man takes a darker and more troubling turn as he finds himself faced with powerful new enemies -- and temptations more powerful still.

With time running out, a repentant Inigo must decide whether to release Edeard's final dream: a dream whose message is scarcely less dangerous than the pilgrimage promises to be. And Araminta must choose whether to run from her unwanted responsibilities or face them down, with no guarantee of success or survival. But all these choices may be for naught if the monomaniacal Ilanthe, leader of the breakaway Accelerator Faction, is able to enter the Void. For it is not paradise she seeks there, but dominion.

Click here to buy The Evolutionary Void from Amazon