To celebrate and promote his latest release 'Kingdom City: Revolt' Ben Ireland pays a visit to this blog to tell us about this new release and the book details can be found at the bottom of the post.

What was the most surprising part of writing this book?
I was most surprised by how dark it was. I was always fascinated by things that were a little dark and gritty, so I set out to create something edgy. Once I was done and I reread the book, I was taken aback by how dark it had actually become. Reading the first chapter again after not seeing it for several months made me think ‘oh gee, I wrote that?’ I think darkness in art is important to help us see the light and good in life. Though I believe some authors take that too far. RR Martin is a prime example. I feel that artists that write darkness simply because it’s “realistic” miss the point of art.

Who is your favorite author? Who has most influenced your work?
Early on, I loved The Hobbit—it was the first big-kid book I read twice (One Fish, Two Fish, Red Fish, Blue Fish was the first little-kid book I read more than once). I read a lot of Azimov growing up, too. Just prior to my writing really taking off, I fell in love with Harry Potter. JK’s world is so colorful and engaging it’s hard to not fall in love. Today I’m an avid fan of Harry Dresden. The engrossing characters and thoroughly conceived world that Butcher has created is something I’m constantly trying to emulate.

When did you know you wanted to be a writer?
I’ve always loved creating. Probably the worst thing that happened to me is when I took a creative writing class in college. The professor told me that my story was the best thing he’d read “in a long time.” I’ve been spiralling since then. That story ended up being a scene of Kissed a Snake, in Xchyler’s A Dash of Madness short story anthology. 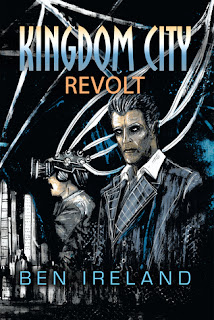 Paul Stevens has survived a terrorist attack, medical experimentation, and an attempt by the government to “neutralize” their rogue subjects. However, his escape cost him his wife, and now he battles to overthrow Brian Shuman, the dictator responsible for her death. With the kidnapping of his daughter and the disappearance of his son, he must choose between saving what may remain of his family or the fledgling rebellion on the verge of collapse.