I wanted to like this - the idea is a good one with a giant ship of unknown origin and full of mystery. The introduction worked well and drew me into the story, but then it lost it. The first issue is that the story drags with some odd diversions that do little to strengthen the tale.

It's a shame really as the basic premise is good, but 500 pages later nothing is really resolved. There is a rich menagerie of aliens, but nothing is done with them. Humans are now effectively immortal which devalues the epic timescales involved in the journey.

I very rarely finish a book I don't like, especially one as long as this, but there are flashes of genius here. Unfortunately they don't develop into anything meaningful. A shame as it had some potential, but ultimately unfulfilling. 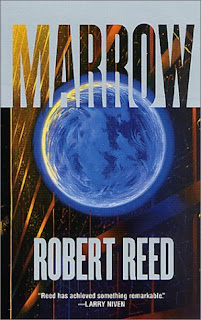 The Ship has traveled the universe for longer than any of the near-immortal crew can recall, its true purpose and origins unknown. It is larger than many planets, housing thousands of alien races and just as many secrets.

Now one of those secrets has been discovered: at the center of the Ship is . . . a planet. Marrow. But when a team of the Ship's best and brightest are sent down to investigate, will they return with the origins of the Ship--or will they bring doom to everyone on board?

Robert Reed, whose fantastic stories have been filling all the major SF magazines for the past several years, spins a captivating tale of adventure and wonder on an incredible scale in this novel based on his acclaimed novella.

Posted by Michael Brookes at 22:19