Author Gavin Smith is the latest to take the Five to Five Thousand Challenge and share his thoughts on what the future holds.

When Michael told me about this blog I thought it sounded like a great idea.  I did, however, find it a little daunting.  Anyone who's read my work will know that I am much more a writer of adventure stories than I am a futurist, but the challenge appealed to me and I thought I would have a crack at it.  So here goes:

Utilising new-media forms, propaganda, and just making-shit-up, old-style capitalist opportunists, often masquerading as white supremacists/nationalists, take control of, or destabilise certain strategic countries.   They encourage isolationist and divisive policies to dissuade a united resistance against corporate abuses and the increasing power of oligarchies.  They systematically de-regulate certain industries, whilst stripping a way the rights of the average person in the street.  This leads to a series of economic disasters and widespread civil disturbances.

Land grabs in Eastern Europe and a series of proxy wars leaves the world constantly on the edge of a global conflict.  A resurgent Russia and China become the new superpowers, with India following closely behind, after Western Europe and America effectively self-sabotage.  The real power, however, are the multinational megacorporations.  Thanks to de-regulation many of them start hiring military contractors, effectively creating their own standing mercenary armies. 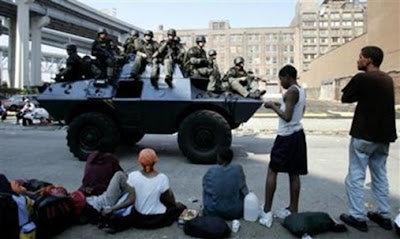 50 Years from now - The Post Capitalist Age (the Quiet Revolution)

Short termism and environmental neglect leaves the world on a knife-edge.  Oligarchs lock themselves in armed compounds whilst automated factories, that employ nobody, churn out goods that people can't afford.  As a result traditional economies begin to collapse.  Around the world, however, people start to opt out of a zero-sum game that they have absolutely no stake in.

Initially adopting E-commerce barter systems and then establishing a secure and stable cryptocurrency, small farming, craft and tech cooperatives start to trade amongst themselves.  This movement grows and grows, micro and crowd financing allows the tech and craft co-operatives to create mircrofacturing facilities.

Slowly the Quiet Revolution grows.  Disparate talents from all over the world come together online, forming think tanks on everything from alternative socioeconomics, to orbital engineering.

At the same time as the Quiet Revolution is happening Pan-African cooperation increases and the continent experiences a period of prolonged stability and growth, finding itself able to (more) sustainably exploit its rich bounty of resources.

Despite the Quiet Revolution, despite the stability in Africa, and despite the significant drop in population, the result of the knock-on effects of various economic disasters, wars and climate catastrophes, Earth's environment is still struggling.  Various think tanks around the world realise that for humanity to have a future they need to look beyond their own world.  Released of the profit-for-profit's sake/bottom line predatory form of capitalism, and motivated by the potential collapse of the Earth's ecosphere, tech co-operatives and science think tanks are able to make extraordinary breakthroughs.  Advances in the fields of warm fusion, carbon nano-fibres and super conductors lead to the largest and most ambitious engineering project in human history.  The Beanstalk: a huge cargo elevator that climbs from the plains of Africa high into orbit, providing a cost-effective and safer way for humanity to leave Earth and explore space.  Entirely crowd funded, the vast majority of humanity have a stake in the elevator, and profit from it.  Slowly, but surely humanity began to bootstrap its way out into the Solar System. 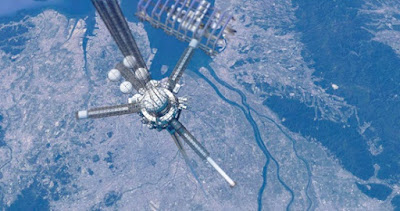 500 Years from now - The Posthuman Age

Humanity has colonised the Solar System and begun its first steps beyond that.  Advances in genetics, cybernetics and biotech have allowed humanity to technologically evolve to deal with the rigours of life in space and on other planets/moons.  Humanity now comes in a myriad of different shapes and forms.  Concepts like nationality have become irrelevant.  Approaching a post-scarcity society, humanity is engaged in a species wide cooperative bid to explore space.  Science, technology and the universe itself becomes the new metanarrative.

Seeing the mistakes they made with Earth, humans decide to mould themselves to the environment rather than terraform, when they colonise Mars.  Extensive automated aerostat gas mining operations take place in Jupiter's turbulent atmosphere.  Saturn also provides gas as well as ice from its rings.  The Earth itself is renewed, having been allowed time to recover from the depredations of the industrial era.  Cities are now wide-open, green areas.  Plant life and living space for reintroduced animals are designed into the architecture. 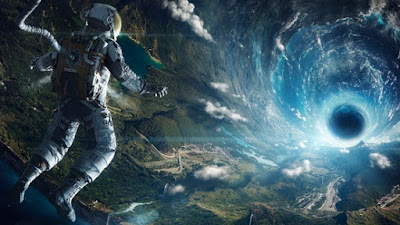 What was once humanity has technologically evolved at an exponential rate.  A singularity of consciousness is achieved.  Able to observe quantum events, science becomes instinctual and difficult to differentiate from magic.

Advanced understanding of five dimensional physics allows post humanity to travel throughout the universe.  The make contact with alien species that they deem they will not negatively impact when they reveal their existence.  Many of these species are non-biological in nature.

Finally as all the secrets of the universe are unlocked by post-singularity consciousnesses, what was once humanity is faced with a choice.  Some choose to remain locked inside their bodies of designer flesh and technology, which take the form of everything from an entire artificial star system, to a diffuse network of femnites.  Others, however, chose to leave behind their flesh and tech bodies and use their consciousness to explore other realms.  The species that began existence as little more than a few cells of life in a shallow warm sea, moves on to the next adventure. 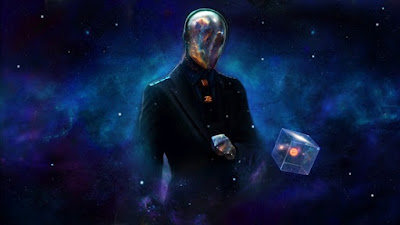 "Hippy utopian bullshit?"  Well perhaps but if you've read any of my books then you'll know I've done my time at the dystopian coalface.  With some of the events unfolding in the world today I thought that I should write something upbeat.

"Not the way that science, economics and human nature work?"  Again, perhaps, though I am fiction writer rather than a scientist, economist or sociologist.  What I am conscious of is that much that is in the 50 year section is within our grasp.  To achieve it comes down to a question of priorities, a question of human decisions.  What do we want?  Should we exist as a species to simply service oligarchies, a model we seem to be moving towards, or do we want to explore space?  "Inner and outer", to quote Bill Hicks.  I have no real problem with people being rich but when you look at the amount of capital that is locked up, doing so little, it is almost as if it has become an obscene prison for the oligarchs in question. 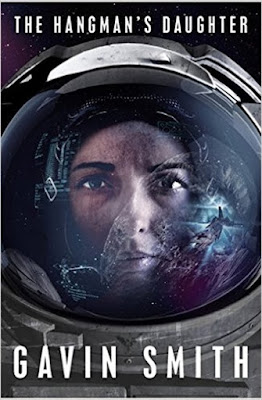 Gavin G. Smith is the Dundee-born author of the hard edged, action-packed SF novels Veteran, War in Heaven, The Age of Scorpio and A Quantum Mythology, The Beauty of Destruction, as well as the short story collection Crysis Escalation and his most recent book, The Hangman’s Daughter (Book 1 of the Bastard Legion) is out now.   He has collaborated with Stephen Deas as the gestalt entity Gavin Deas on Empires: the First Battle and Elite Dangerous: Wanted. You can find out more about Gavin by visiting his website,  following him on Twitter @gavingsmith or Facebook.
Posted by Michael Brookes at 15:36