It must be hard for an author to write in a genre they've already written the defining novel for, and while this novel doesn't quite match the heights of some of his earlier work, it's still a good cyber-punk read. It's quite a deceptive read, as the style feels quite light. The technology is mostly assumed as part of the world, and there's no great effort to explain or justify it. The story also has a weird, almost subdued beat.

Those might sound like criticisms, but actually work in the book's favour. I didn't feel driven through the story, but languished through the plot. It also provides space to enjoy the writing itself, as well as the lives it portrays.

It's relaxed approach doesn't always work, and in places it did feel that it was drifting along. The biggest issue with this is the ending, this felt unsatisfactory with some loose ends. More than that it seemed more like it just faded away.

Overall I enjoyed it, but it lacked the depth and colour I appreciated from his earlier books. 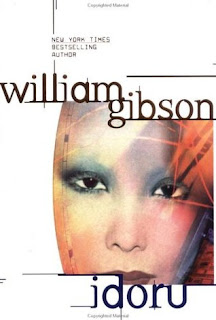 After an attack of scruples, Colin Laney's skipped out on his former employer Slitscan - avoiding the rash of media lawyers sent his way - and taken a job for the outfit managing Japanese rock duo, Lo/Rez. Rez has announced he's going to marry an 'idoru' by the name of Rei Toi - she exists only in virtual reality - and this creates complications that Laney, a net runner, is supposed to sort out. But when Chai, part of Lo/Rez's fan club, turns up unaware that she's carrying illegal nanoware for the Russian Kombinat, Laney's scruples nudge him towards trouble all over again. And this time lawyers'll be the least of his worries . . .

William Gibson is a prophet and a satirist, a black comedian and an outstanding architect of cool. Readers of Neal Stephenson, Ray Bradbury and Iain M. Banks will love this book. Idoru is the second novel in the Bridge trilogy - read Virtual Light and All Tomorrow's Parties for more.

'Luxuriate in prose simultaneously as hard and laconic as Elmore Leonard's and as glacially poetic as JG. Ballard's . . . an exhilarating ride' New Statesman

William Gibson's first novel Neuromancer has sold more than six million copies worldwide. In an earlier story he had invented the term 'cyberspace'; a concept he developed in the novel, creating an iconography for the Information Age long before the invention of the Internet. The book won three major literary prizes. He has since written nine further novels including Count Zero; Mona Lisa Overdrive; The Difference Engine; Virtual Light; Idoru; All Tomorrow's Parties; Pattern Recognition; Spook Country and most recently Zero History. He is also the author of Distrust That Particular Flavor, a collection of non-fiction writing.

Posted by Michael Brookes at 13:28