In day 4 of the guest author interview blitz we welcome Scott Marlowe, you can read what he has to say below: 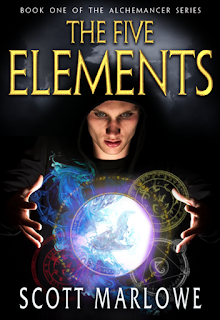 Please introduce yourself, who are you and what do you do?
I'm Scott Marlowe. I'm an author trying to bring great fantasy to the masses. Or at least to the handful of people who read my stuff.

Just how crazy are your dogs?
Pretty darn crazy. Let's just say somewhere out there there's a circus missing a couple of its freak show performers.

What first inspired you to start writing?
Reading and a fascination with mythology. I've always wanted to indulge my own imagination by making the fantasy of it all more real through writing.

And what was your first story?
A very bad short story about a ranger and a witch. Ironic that twenty years later my first novel (The Hall of the Wood) is also about a ranger and a witch. I actually sent the short story—my very first submission—to a small press magazine which is probably long gone unless they persevered and moved online. This was pre-Internet. Say, about 1990. It was accepted. I still have the magazine and the check the editor wrote me. I think it was for $7 or something.

If you could write anyone's biography, whose would it be?
That's a tough one. There are many, many historical figures I would love to spend the time writing a biography about. However, if I had to choose, I'd go with Leonardo da Vinci. The man excelled at so many things it would be fascinating to attempt to learn the origins of his brilliance.

What do you enjoy most about writing?
The act of creating the "perfect" scene. I often have a pretty good idea in my head as to how I want a scene to play out, but to actually write it out and experience it through the characters is a lot of fun. I really enjoy world building, too. I learned a long time ago, though, that the writing comes first. I only build the world enough to carry the story. Anything beyond that is too Tolkienish.

And the least?
I'd have to say editing. It would be great if my first draft was the final draft, but we all know it doesn't work like that.

What advice would you give new and aspiring authors?
Finish your novel/story/whatever before you start editing. Also, if you're an outliner, don't be afraid that it's going to limit your creativity while you're writing the actual story. Some people feel outlines prevent their characters from taking over and leading the writer down unexpected avenues. Maybe that's true for some, but I aspire to something Terry Brooks talks about in his book, "Sometimes the Magic Works", which is that he always uses outlines and thus always knows where the story is going because of it. Where some writers find themselves at a dead-end because of poor or lack of planning, he claims to have never thrown away words because the story went somewhere it wasn't supposed to. I've spent many months working on outlines for past and current projects. I'm a believer.

What are you working on at the moment?
I'm working away on the second novel in The Alchemancer series, The Nullification Engine, which continues the story of Aaron, Ensel Rhe, Serena, and others. It picks up pretty much where The Five Elements left off. I'm hoping to have it ready to go to my editor by March or so of next year.

Tell us about your latest work and how we can find out more.
My latest novel is The Five Elements, which is a blend of fantasy, steampunk, and what I call pseudoscience, which is basically made-up science. For example, in the novels every living creature has a certain "attunement" to the world around them. Using scientific instruments, this attunement can be measured as a frequency value. Attunement ties into magic, so there's this bridge between sorcery and science that will continue to be explored as The Alchemancer series progresses.

Thanks to Scott for sharing his thoughts with us, tomorrow we welcome Max E Stone to the hot seat.
Posted by Michael Brookes at 13:13